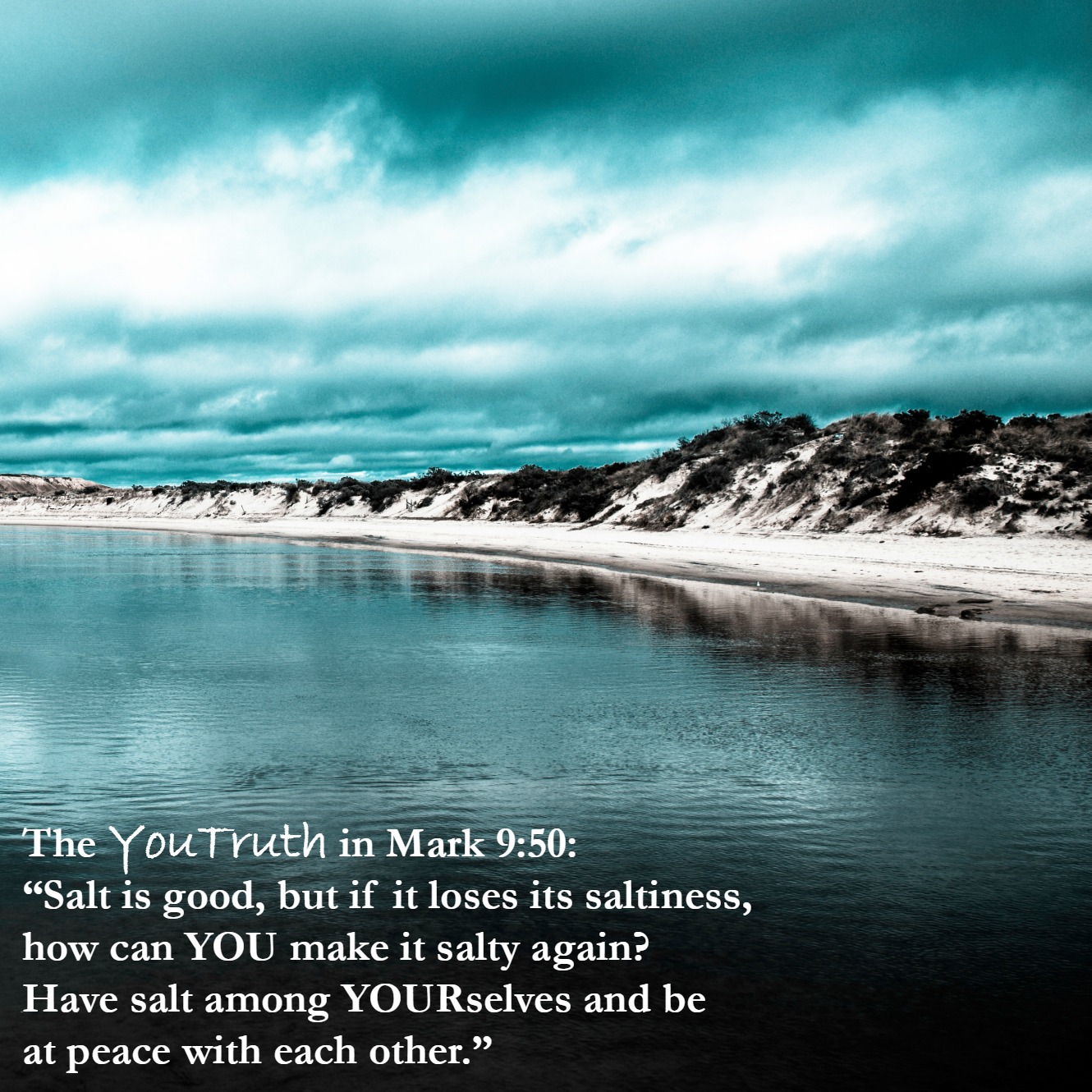 “Salt is good, but if it loses its saltiness, how can you make it salty again? Have salt among yourselves, and be at peace with each other.”

According to Jesus, you are the salt of the earth. Salt seems like an insignificant thing, to be occasionally sprinkled on food. In Jesus’ time salt was used in two important ways. In this context, Jesus’ illustration is not insignificant, but powerful and meaningful.

Before food could be refrigerated (meat particularly), salt was used to cure it and keep it from going bad. While it certainly contributed to its taste, as it does today, its primary function was to prevent decay. Carrying the illustration forward to today, Jesus wants to prevent the decay of your relationship with Him and with others. He does this amazingly by being both the means and the end. If you continually pursue a strong relationship with Him, He will be the “saltiness” that you can then apply to your relationships with others. When you are at peace with Jesus, you can them be at peace with others.

The second way that salt was used in Jesus’ time illustrates the opposite condition of relationships—fractured and hurting. After salt had been used up and could not fulfill its original function any longer, it was tossed out as a covering for roadways, much like gravel might be used today. If you allow your relationship with Jesus to falter, it becomes like “unsalty” salt and is only good for tossing onto the ground, and your relationships with others will falter along with it. Jesus does not want this for you!

So be salty today! Carry the “salty” peace of Jesus into all of your relationships.

Salt, light, trampling, bushel baskets, cities, hills, mockery, persecution, lies. Believe it or not, these are all pieces to a puzzle that, when properly assembled, clearly reveals this picture: God loves those of the world that have turned away from Him and He wants us to help Him get them back. (And by the way, our participation isn’t optional.)

“You are the salt of the earth. But if the salt loses its saltiness, how can it be made salty again? It is no longer good for anything, except to be thrown out and trampled by men. You are the light of the world. A city on a hill cannot be hidden.  Neither do people light a lamp and put it under a bowl. Instead they put it on its stand, and it gives light to everyone in the house. In the same way, let your light shine before men, that they may see your good deeds and praise your Father in heaven.”

Jesus taught that great rewards come to those who follow Him. He also taught how we could tell we were getting the ‘follow Him’ part right. His teaching on the subject contains a whole list of objects and indicators – salt, light, trampling, bushel baskets, cities, hills, mockery, persecution, lies. A proper understanding of this confusing stack of stuff reveals fundamental underlying principles. To help navigate through all of this, we’ll hijack two of Newton’s Laws of Motion (anyone remember these from science class?) and repurpose them as “YouTruth Laws of Spiritual Motion.”

Jesus taught us that once saved, we assume a vital role in a great ‘redirection project’ for the world. The bottom line: Those of the world are heading in the wrong direction. God loves them and desperately wants them to turn to Him. (It’s important to remember that those redeemed by Jesus once belonged to this group.) We are to help turn them around (see Matthew 28:19). How to do it and how to know you’re getting it right is the core of Jesus’ teaching in our passage. In it He tells us to bright and salty. Let’s start to dissect and understand His teaching by rolling out our first principle:

The world, in a state of uniform motion away from God, tends to remain in that state of motion unless an external force is applied to it.

Jesus used two examples to illustrate how this spiritual law works—salt and light. The proper use of these items is akin to applying an external force, influencing and changing that to which it is applied.

Salt was used as a seasoning in biblical times as it is today. Salt was also used as a preservative. In order to change the taste of unseasoned food, salt must have flavor. In order to halt the steady decay of meats, salt must be ‘salty.’ In both uses, ‘salty salt’ makes a difference. It turns things around. It’s qualities slow decay or give bland food pizzazz. It is an external ingredient that, when applied, undoubtedly changes that which it touches.  Once salt has lost its flavor it becomes useless for either purpose. Such ‘used up’ salt was used in biblical times to cover walkways and roadways, much like gravel might be used today. Thus Jesus described it as ‘trampled by men.’

In order to change darkness into ‘lightness’, a force that is fundamentally different must be applied. Simply put, light is the opposite of darkness and therefore qualifies, but when covered by a bushel basket, would lose its differentiating quality from darkness and would thus have no effect on it. Unencumbered light, as with the lights of a city upon a hill on a dark night, makes such a difference that it can be seen for miles.

We are to be like these things. We must make a difference. Our presence, words, and deeds, must be markedly different. They must, as the law states, be external. They must come, not from the world, but from God. Then, and only then, can they turn people of the world, heading in the wrong direction, around. How do we know when we’re getting it right? How do we know, when we are sufficiently ‘bright and salty’, letting God direct our actions and our testimony? Let’s look at our next principle:

For every godly action, there is an opposite worldly reaction.

Many will wrongly expect the world to receive our testimony with open arms, willing acceptance, and maybe even applause and accolades. While some will embrace the message, there will always be those who don’t.  You see, the world likes the direction it is going. A life of material self-focus is very comfortable and fully acceptable to those who don’t know that God has something far greater for them. And the world will fight to protect these comfortably ways. When we follow Jesus, the world will press against us. There will be opposition at every turn. This opposition will often be unpleasant and sometimes downright nasty. People will mock us. People will tell lies about us. We will face persecution. When this happens, Jesus says to receive it with joy! Why? Because the 2nd Law instructs that we are not on the right path, we are not heading in the right direction, we are not following Jesus if we are not facing these consequences. If we are not facing opposition, we are not on the path to the great reward Jesus promises! It is Jesus’ great reward, and only Jesus’ great reward, that can bring us true joy. As it turns out, mockery, lies, and persecution are exactly the assurance we are looking for. And the world unwittingly provides it.

Jesus was no passive teacher on this point. (see Hebrews 12:1-3) He led by example. He died a shameful, agonizing death on the cross because of the joy He knew would be His for having done so. There are many other examples of faithful people that faced worldly opposition too. Prophets, apostles, and countless others who were simple, average folks like us, were beaten, ostracized, even killed. These predecessors form a ‘great cloud of witnesses’ that surround us everywhere, every minute of every day, especially when we are facing opposition ourselves. They remind us of the joy of the prize and to not lose hope or grow weary (see Hebrews 11:1 – 12:1). That’s the truth.

That’s the YouTruth – You Are the Salt and Light.