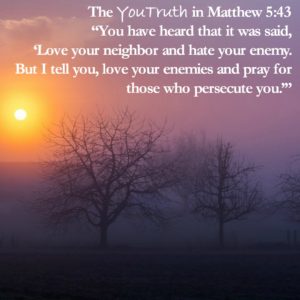 “You have heard that it was said, ‘Love your neighbor and hate your enemy. But I tell you, love your enemies and pray for those who persecute you.’”

Loving enemies. Now that’s a hard one. Don’t you wish Jesus would quit teaching us to do all this hard stuff? And yet, here it is, plain and simple. So let’s see how we can pull this off.

Two shifts in perspective will be helpful:

Who is the enemy, really?

When we are dealing with enemies, it is important to understand that enemies are not who they seem to be. The Apostle Paul taught powerfully on this subject when he wrote in Ephesians 6:12:

If we focus on people we may consider enemies, it is virtually impossible to love them. But if we understand that the true enemy is Satan, who has lured a person into the behavior of an enemy, then it is much easier.  This doesn’t mean that you have to put yourself in harm’s way, or that you have to consider the person a close friend. It just means that you pray for the person, extend kindness when there is a safe opportunity to do so.

What makes an enemy?

Conflict makes enemies of people. Without conflict, people cannot truly be enemies.  If your response to an “enemy’s” unkindness, is more unkindness, then you’ve made an enemy indeed. But if your response to an enemy’s mean-spirited action is forgiveness and love, the condition of conflict vaporizes. Just like it takes two to fight, it takes two to be enemies. If only one “enemy” is participating, then love can find its way into the situation, and perhaps, head off the whole enemy thing at the pass. 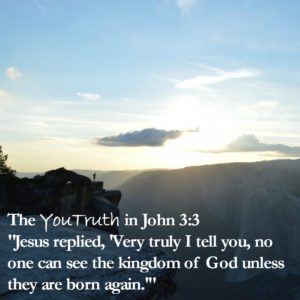 “Jesus replied, ‘Very truly I tell you, no one can see the kingdom of God unless they are born again.'”

Nicodemus, a wise religious man, saw that Jesus was someone special, even if the ruling council, of which Nicodemus was a part, didn’t think much of Him. So Nicodemus came to Jesus alone, at night, to talk to Him. Before Nicodemus could even ask his first question, Jesus issued the statement above. Nicodemus was understandably confused. None of Nicodemus’ extensive religious training had prepared him to deal with such a profound paradox. We can only assume that Nicodemus left his conversation with Jesus with much to think about, paradigms to change, and new ways of understanding God’s Kingdom to process. Later in the book of John, we find out that Nicodemus, despite the ruling council’s severe objections to Jesus’ message, became a believer and follower.

We are all “Nicodemuses” in some way. And we can find great hope in Nicodemus’ story.

We live in a world that doesn’t entirely agree with Jesus’ message of grace and hope. It can beat us down at times. But we can know that we can come to Jesus, in the night if we have to, and ask Him about the Kingdom. And He will tell us profound, sometimes confusing, but always amazing things about eternal life.

We are all wise in our own way, and some of that wisdom will be off-target from the eternal perspective. But we can know that we can come to Jesus and ask Him which parts of our wisdom work, and which parts don’t. And He will tell us.

We may come away from these encounters confused or uncertain. But, as with Nicodemus, if we come to Him, with a yearning to understand, Jesus will leave that yearning intact and active, exactly what is needed to become deeper believers and truer followers of Him.

Oh, and by the way, Jesus wrapped up His explanation of the whole “born again” thing to Nicodemus in this way:

“For God so loved the world that he gave his one and only Son, that whoever believes in him shall not perish but have eternal life.” 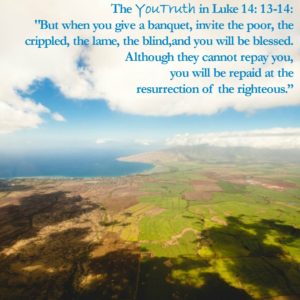 “But when you give a banquet, invite the poor, the crippled, the lame, the blind, and you will be blessed. Although they cannot repay you, you will be repaid at the resurrection of the righteous.”

Not many of us are in the regular business of giving banquets. Huge lavish gatherings with hundreds of high-profile invitees and five-course meals don’t fill up the typical daily planner. Nevertheless, this passage has much to say to us. Whether we know it or not, we are all capable of throwing banquets on an incredible scale. We just have to understand banquets from the Kingdom’s perspective.

A man stands on a street corner with “Hungry, please help” scrawled on a piece of cardboard torn from an old box. You respond by buying an extra sandwich at the shop down the street and hand it to him. At that moment, that man has received his invitation to sit at Jesus’ banquet table.  You have ushered him into the banquet hall and shown him to his seat near the head of the table.

A women’s car is broken down on the side of the road. She has a crying toddler on her hip and a distraught look on her face. You respond by arranging for a tow truck, paying the towing fee, and providing some extra money to help with the repairs. That woman and her child have received their invitation to sit at Jesus’ banquet table. You have ushered them into the banquet hall and shown them to their seats near the head of the table.

You see, in God’s Kingdom, we can build our banquets one person at a time. And over time, the size of the banquet you give in Jesus’ name, can be far bigger than any lavish, celebrity event the richest of the rich could throw in this world. So have at it! Get your banquet invitations ready to deliver! God will put those in your path that He intends for you to invite. 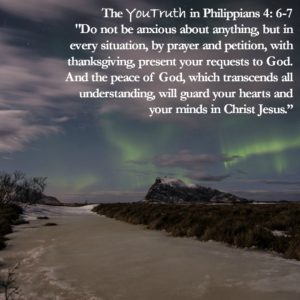 “Do not be anxious about anything, but in every situation, by prayer and petition, with thanksgiving, present your requests to God. And the peace of God, which transcends all understanding, will guard your hearts and your minds in Christ Jesus.”

So many things can cause anxiety. I’m sure you can recount situations or circumstances that created anxiety for you. You may even experience anxiety today. God has a prescription for the ailment of anxiety that has three equally important ingredients—prayer, petition, and thanksgiving.

It starts with thanksgiving. This can be the hardest part when you’re feeling anxious! But this is what makes the rest of it work. The one thing you can know for certain is that God loves you immensely. He sent His Son to die for you after all. In this grand love for you, God is always working to bring about what is best for you. It’s always good to remember that God exists eternally outside of the confines of time. Therefore, in every case of anxiety you face, He has already worked out what is best for you in your current situation (and for every future situation you will ever face)! It’s already done!

Armed with a state of thanksgiving all that is left to do is to talk to God about what is happening. Don’t hold anything back! He can handle it! Ask Him for things. Ask Him to take the anxiety away. Ask, ask, ask, all the while thanking Him for already having it all worked out.

When using these three ingredients together, not only does God take away the anxiety, He does you one better. He replaces it with a piece of Himself—the  peace  of Himself. You will recognize it right away because, though you will experience it, you won’t be able to understand it. It will come directly from eternity and will deliver you to an eternal peace that is out of this world.

Are you feeling anxious today? Try God’s remedy right away!